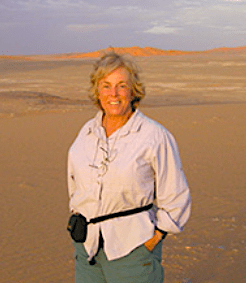 Diane LeBow is an award-winning writer and photojournalist. She is the recipient of Gold and Silver Solas Awards for "Best Women's Travel Writing," and she is President emerita of Bay Area Travel Writers.

Based in San Francisco, Diane has published stories with Salon.com, VIA Magazine, B for Savvy Brides, and Copley News Service, as well as many other national newspapers and magazines.

Diane has traveled to more than 90 countries. She has spent time with Afghan women, the Hopi, Amazon people, Tuvans, Mongolians, Corsicans, and Parisians. She has scuba dived with sharks in the Red Sea and trained champion Morgan horses.

A pioneer of college women’s studies programs, Diane received her Ph.D. in the History of Consciousness from the University of California. She is also the recipient of a Lifetime Achievement Award from Douglass College at Rutgers University. Diane began her teaching career in the Netherlands and was a college professor in Paris, New York City, and California.

Diane is currently working on a book about her search for the best of all possible worlds.