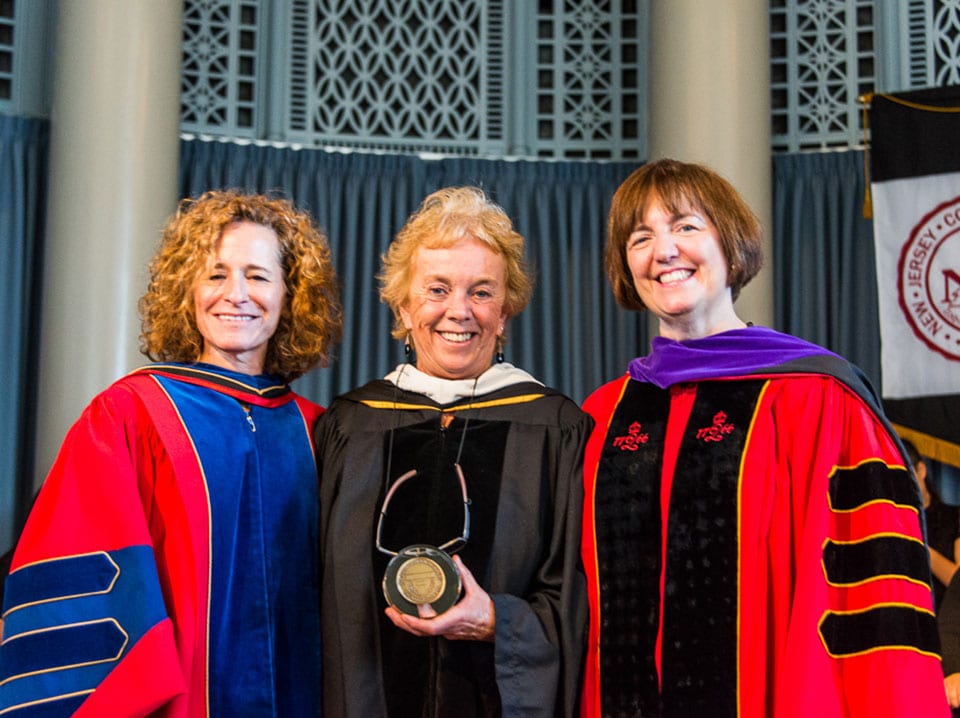 Throughout a thirty-five-year career in higher education, Diane LeBow ’61, Ph.D., helped create and propel Women’s Studies as an academic field. She has the distinction of being a founding member of the National Women’s Studies Association, further promoting feminist teaching, research, and service.

Diane also secured her place as a global citizen as a writer and photojournalist traveling the world, focusing on international travel and cultures. Among her work, Diane has written about Afghan women, the Hopi, Amazon people, Tuvans, Mongolians, Corsicans, and Parisians.

In recognition of her accomplishments, Diane was awarded the Lifetime Achievement Award from Douglass College at Rutgers University.

Diane came to Douglass College transferring from another school where she originally studied veterinary science, a subject that seemed second nature to her equestrian life riding and competing in shows during her childhood. As a Douglass student, she was in the French Club and involved in modern dance and theater. Summer travels in Europe with other students after graduation helped shape her future academic and traveling life. She went on to earn a master’s in English from the University of California, Berkeley, and a doctorate in the history of consciousness with a focus on women’s studies and women’s literature from the University of California, Santa Cruz. She began her teaching career in the Netherlands and was a college professor for many years in Paris, New York City, and California. She is a professor emerita of Women Studies and English at Canada College outside San Francisco, where she was founder and director of the Women’s Studies, Women’s Reentry, and Women’s Center Programs. She has inspired countless students with her accomplishments and enthusiasm.

Her experience spans the globe, having held teaching and leadership positions at the International School in The Netherlands, Consortium of Community Colleges Study Abroad Program in Paris, New York City Community College and Canada College. She developed and directed one of the first women’s studies, women’s reentry and women’s center program at a community college in the country which became a model for others. Today, Diane teaches travel writing seminars at San Francisco State University’s Osher Lifelong Learning Program. Autumn 2014 travel and research plans include a trip to Iran, Turkmenistan, and Uzbekistan.

Throughout her career, Diane has remained dedicated and engaged at Douglass and in the Rutgers community. She returned to campus to deliver the 2007 Zagoren Lecture, Women of Afghanistan and the World: Stories and Photos from the Road. Her work about Afghanistan earned her the Best Women’s Travel Writing Award’s Travelers’ Tales Solas Gold Award. As a consistent contributor, and through a planned gift, she is creating a legacy for generations to come. Her support will help a Douglass student whose career interest includes furthering women’s rights, writing, and literature, all through an international perspective.

She is the recipient of many awards and grants, including a National Endowment for the Humanities grant for her work, “Overcoming Sexism and Racism in the College Curriculum; and a Ford Foundation grant for the program, Mainstreaming the New gender and Multicultural Research into the Community College Curriculum.” Based in San Francisco, she has published stories with Salon.com, VIA Magazine, Copley News Service, Travelers Tales anthologies, France: A Love Story: Women Write about the French Experience (Seal Press, 2004), Greece: A Love Story: Women Write about the Greek Experience (Seal Press, 2007); Foreign Affairs: Erotic Travel Tales (Cleis Press); B for Savvy Brides, and many national newspapers and magazines.

Awarded grants from the Ford Foundation and the National Endowment for the Humanities.

Please enter your name.
Please enter a valid email address.
Loop Me In!
Something went wrong. Please check your entries and try again.